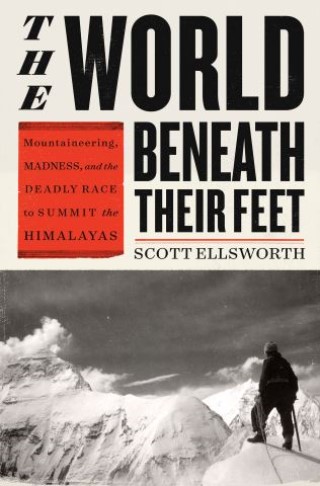 The World Beneath Their Feet

Mountaineering, Madness, and the Deadly Race to Summit the Himalayas

A saga of survival, technological innovation, and breathtaking human physical achievement -- all set against the backdrop of a world headed toward war -- that became one of the most compelling international dramas of the 20th century.
As tension steadily rose between European powers in the 1930s, a different kind of battle was already raging across the Himalayas. Teams of mountaineers from Great Britain, Nazi Germany, and the United States were all competing to be the first to climb the world's highest peaks, including Mount Everest and K2. Unlike climbers today, they had few photographs or maps, no properly working oxygen systems, and they wore leather boots and cotton parkas. Amazingly, and against all odds, they soon went farther and higher than anyone could have imagined.

And as they did, their story caught the world's attention. The climbers were mobbed at train stations, and were featured in movies and plays. James Hilton created the mythical land of Shangri-La in Lost Horizon, while an English eccentric named Maurice Wilson set out for Tibet in order to climb Mount Everest alone. And in the darkened corridors of the Third Reich, officials soon discovered the propaganda value of planting a Nazi flag on top of the world's highest mountains

Set in London, New York, Germany, and in India, China, and Tibet, The World Beneath Their Feet is a story not only of climbing and mountain climbers, but also of passion and ambition, courage and folly, tradition and innovation, tragedy and triumph. Scott Ellsworth tells a rollicking, real-life adventure story that moves seamlessly from the streets of Manhattan to the footlights of the West End, deadly avalanches on Nanga Parbat, rioting in the Kashmir, and the wild mountain dreams of a New Zealand beekeeper named Edmund Hillary and a young Sherpa runaway called Tenzing Norgay.

Climbing the Himalayas was the Greatest Generation's moonshot-one that was clouded by the onset of war and then, incredibly, fully accomplished. A gritty, fascinating history that promises to enrapture fans of Hampton Sides, Erik Larson, Jon Krakauer, and Laura Hillenbrand, The World Beneath Their Feet brings this forgotten story back to life.